To begin, let us introduce you to Git.

Git is software that you can install and run locally on your own computer, and it allows you to track changes to your files as you are working on them. Git helps you manage nightmare scenarios like the one described above, because it makes it easy to have different versions of the same document, to easily work by yourself on the same project on multiple computers, and to collaborate with other people (whether you’re working at different times or simultaneously)! In other words, Git is like an undo button, but with labels showing you what changes were made when and with a history that goes back to the very first change you ever made to the project. This makes it ideal for collaborative projects.

But Git, as a version control system, is even more powerful in combination with GitHub:

GitHub provides the service of storing and sharing your git repositories254 “repo” is short for “repository”– repo is like a folder with files in it (that are usually related as part of a project), with an associated history of changes over time. online. Anyone can get a free account on GitHub and they provide free premium accounts to students (see here).

To describe some of the most useful functionalities of Github, we will set the stage by describing Github as a place where you can store your work in folders called repositories. These repositories live in the “cloud,” in that they are accessible via internet (github.com) and therefore allows you to access them from any device.

For instance, imagine that your collaborator has a project called “hello” - they have stored all of their code, materials, and analyses into a repository called “hello” on Github: 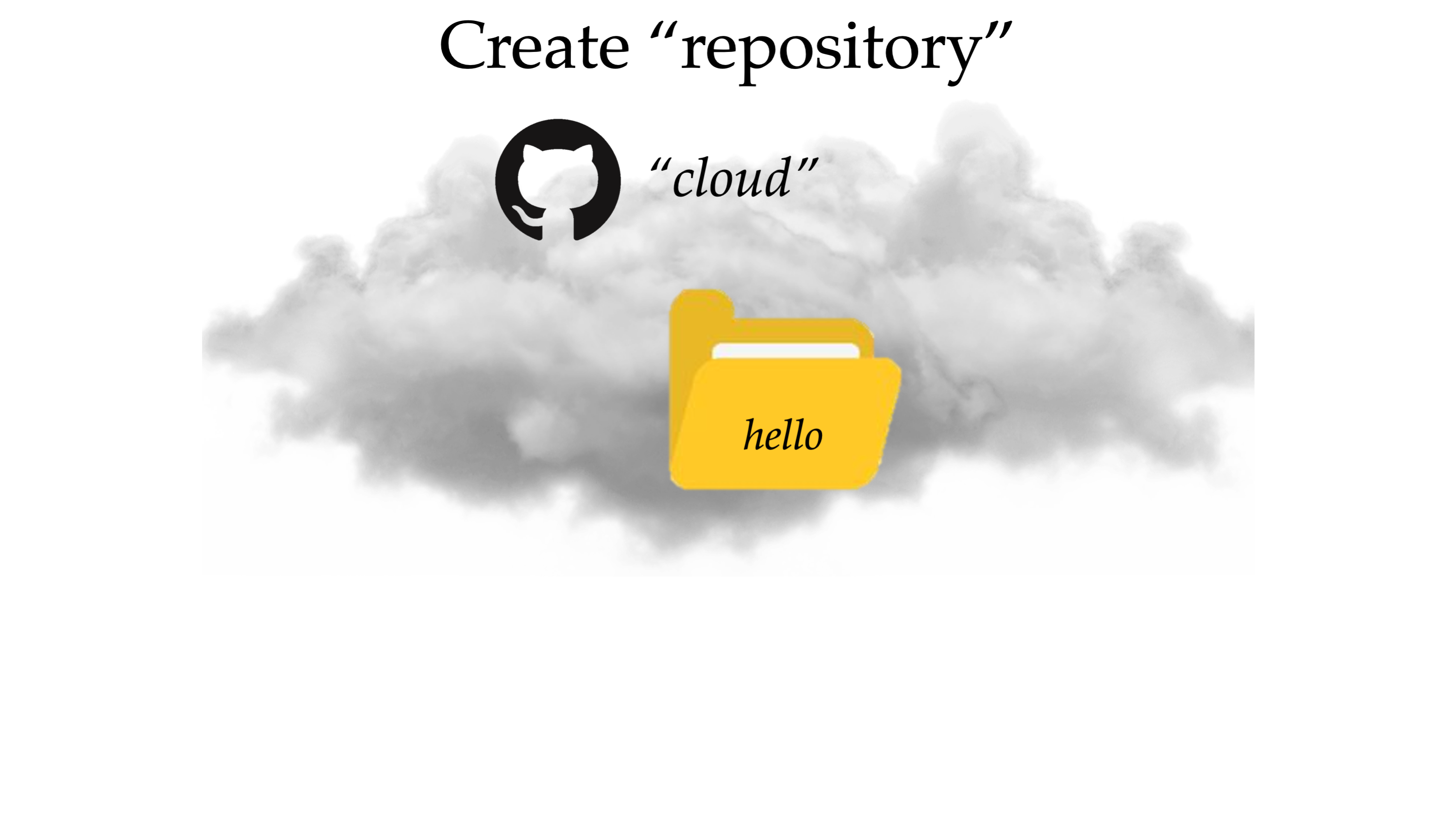 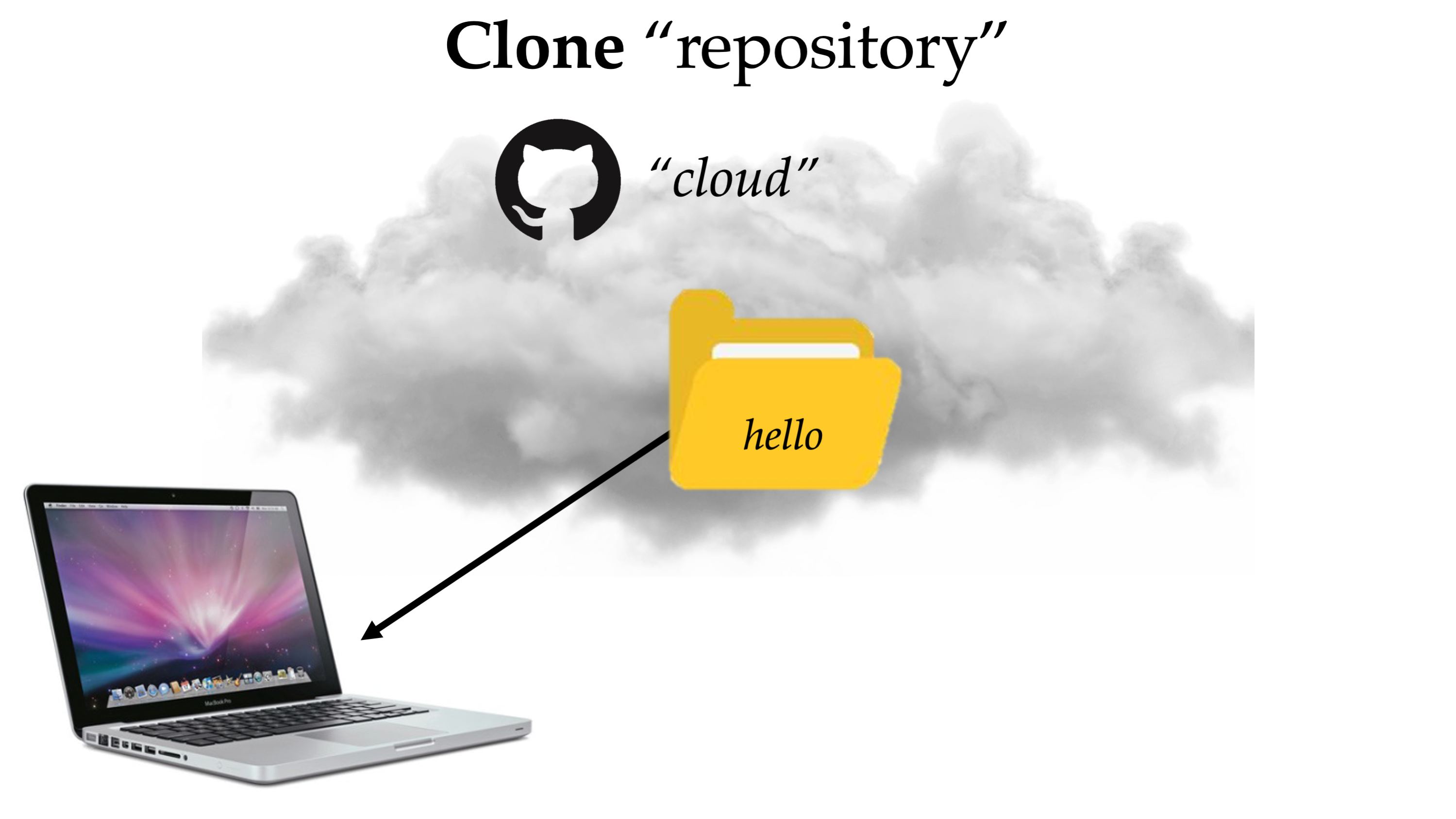 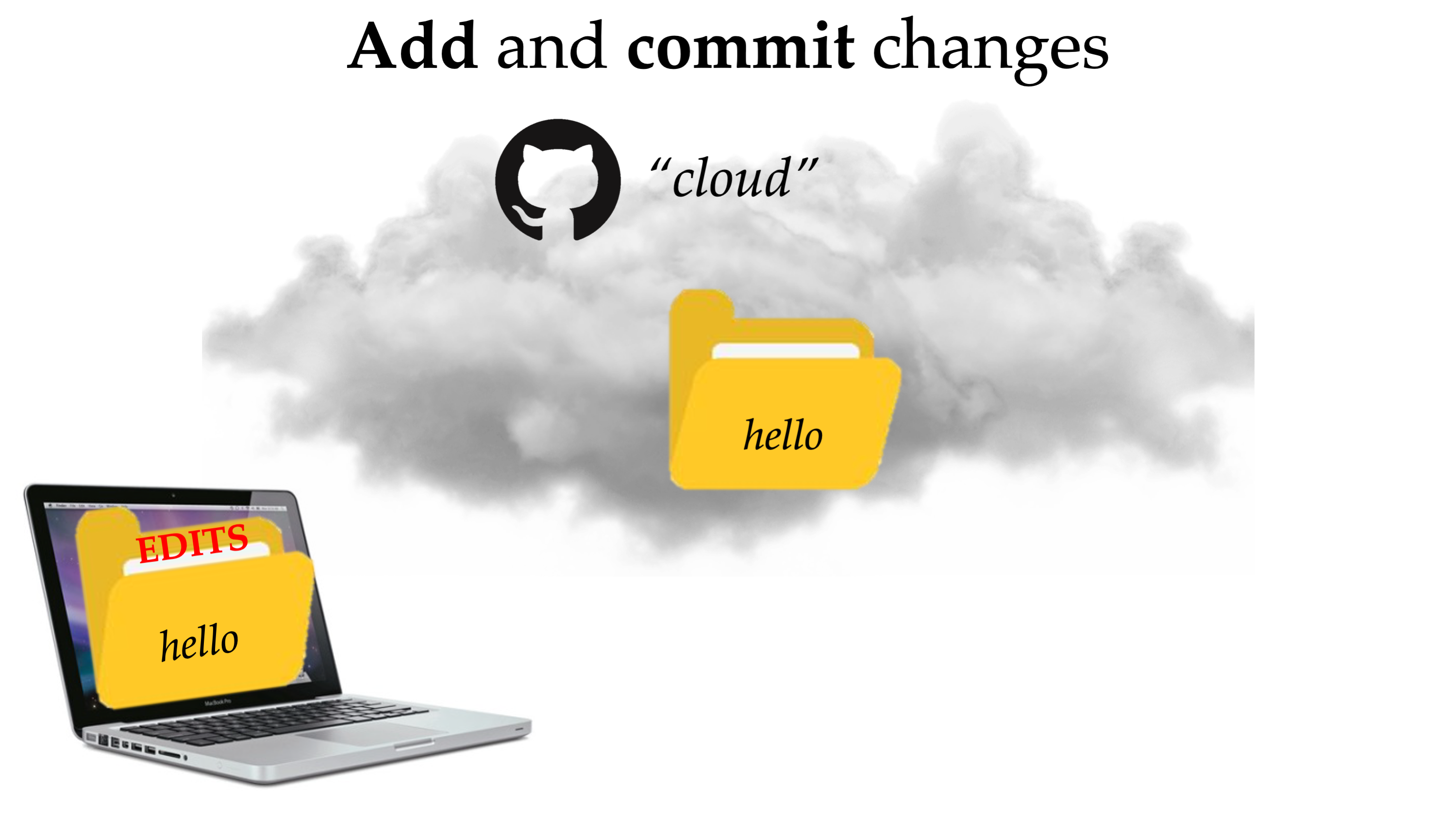 Now, you are ready to actually share your changes to the cloud, where all of your collaborators can see what you changed This step is called “pushing” to Github: 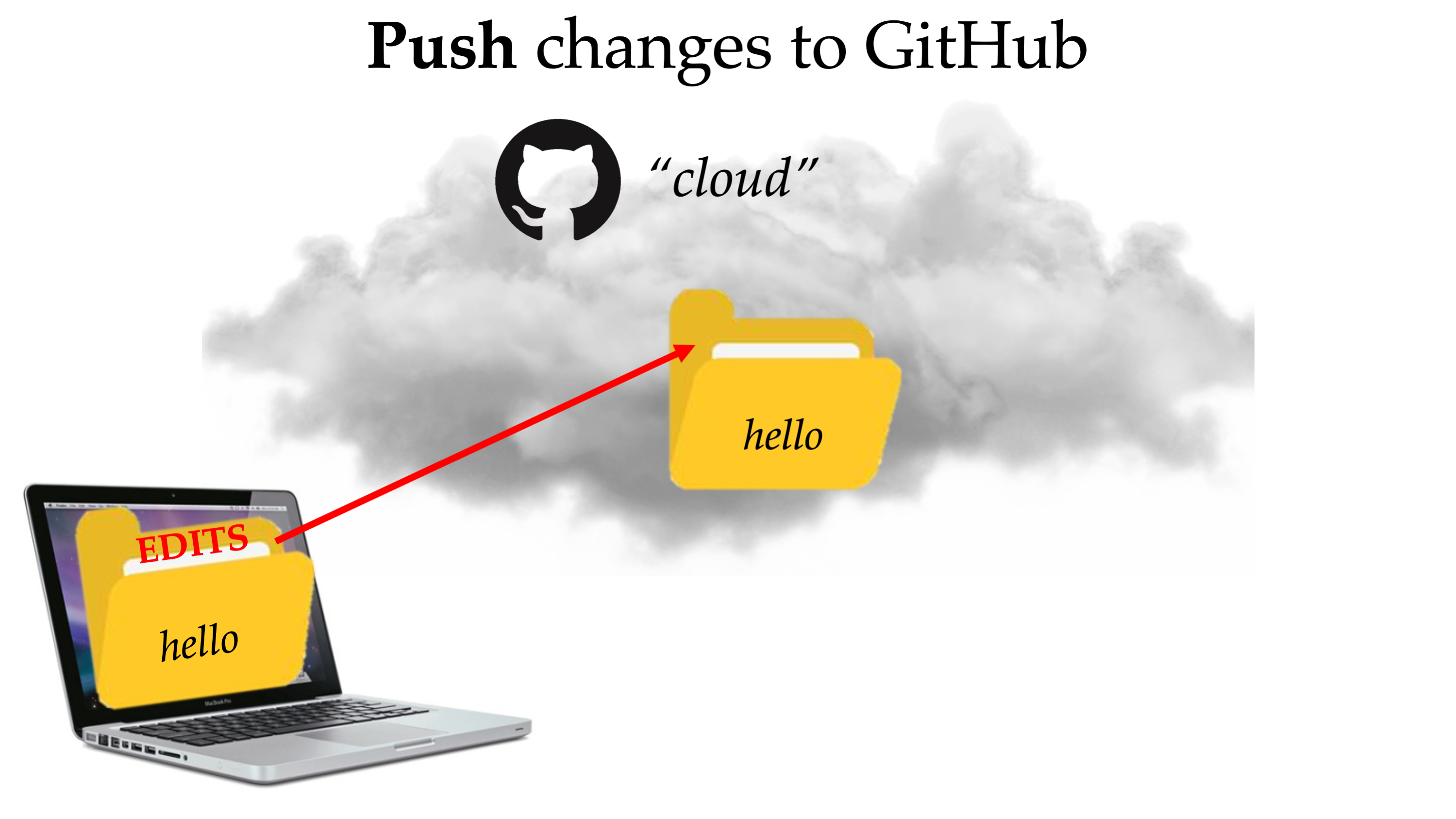 So far, we have described one user’s interaction with Github. And while using Github as a way to track your own changes is a good idea, Github’s real potential is unlocked once you have many users collaborating on the same project. This allows any collaborator to “pull” the most recent version of the repository at any time, keep track of who made what change at what time, and easily revert to previous versions: 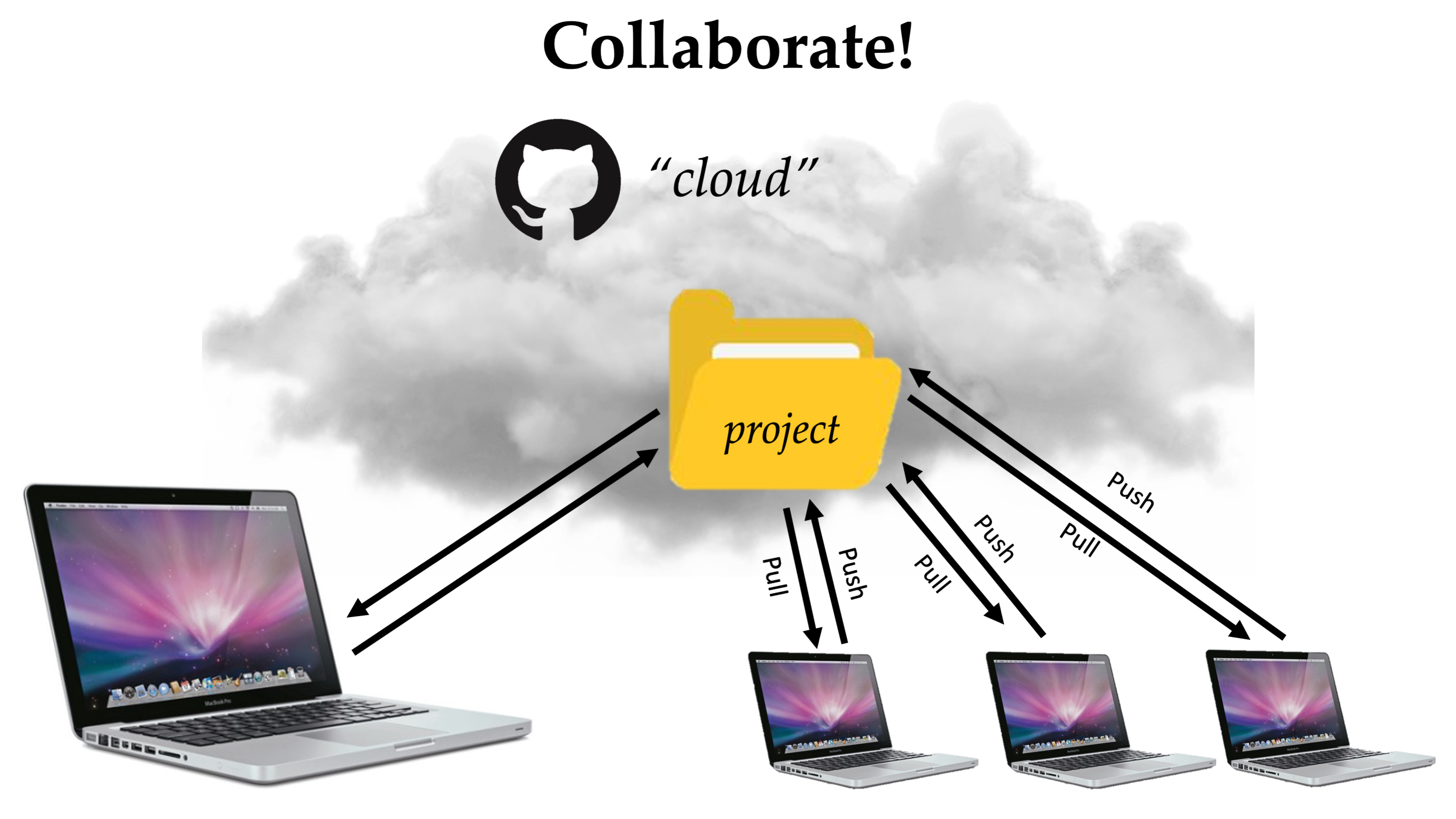 Now that we’ve covered the different functionalities of Github on a conceptual level, the next section will be a more practical tutorial for how to use Github in the ways described above.

In this tutorial we’ll be working in Terminal. Here are a few useful commands to be aware of: 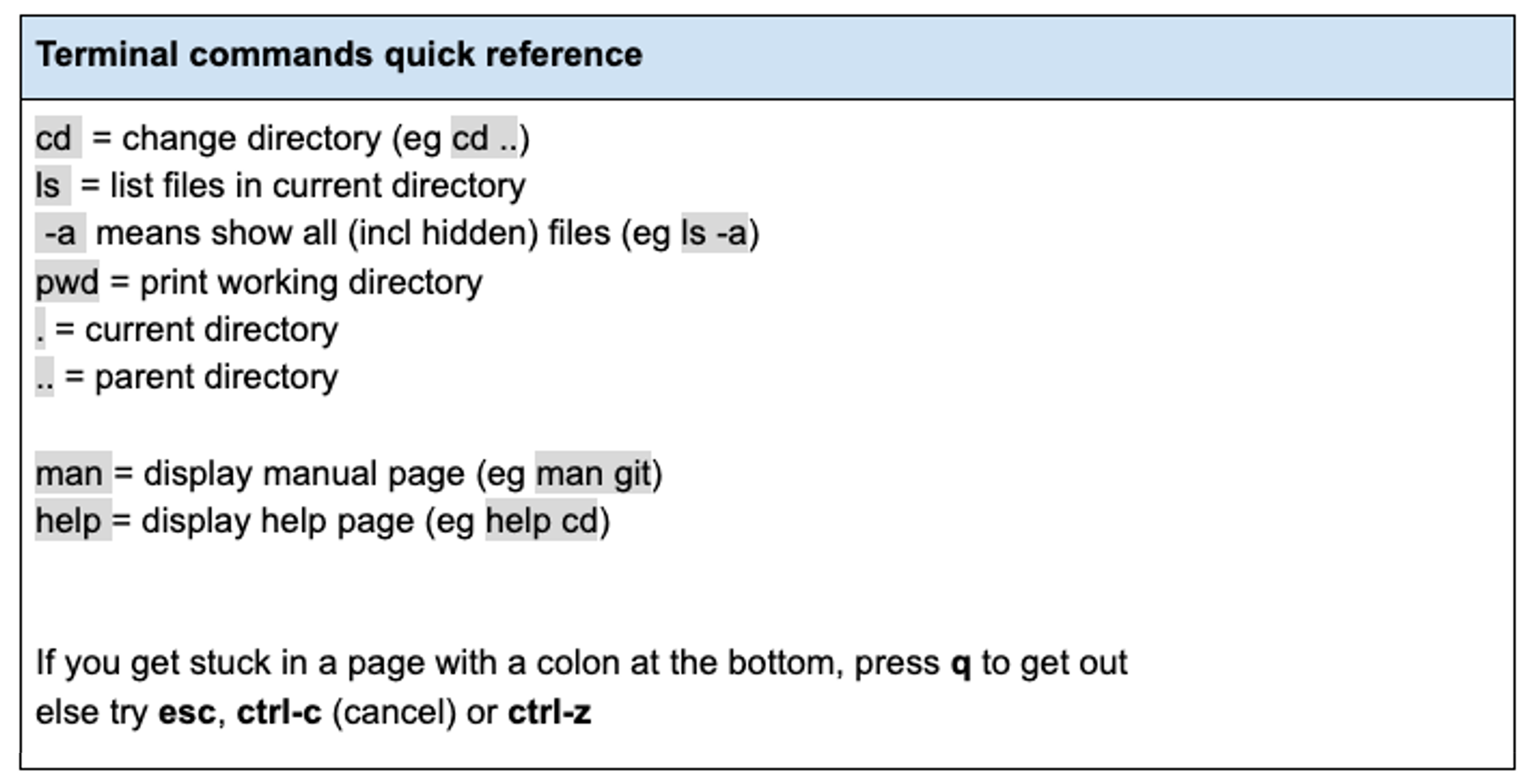 Go to http://git-scm.com/downloads and install git.

1.1 Did you successfully install?

to see the current version of git that is installed.

This tutorial will focus on how to use Github from the terminal, but if you prefer a simple point-and-click experience, you can install the GitHub desktop app. Here is a screenshot of what the desktop version looks like: 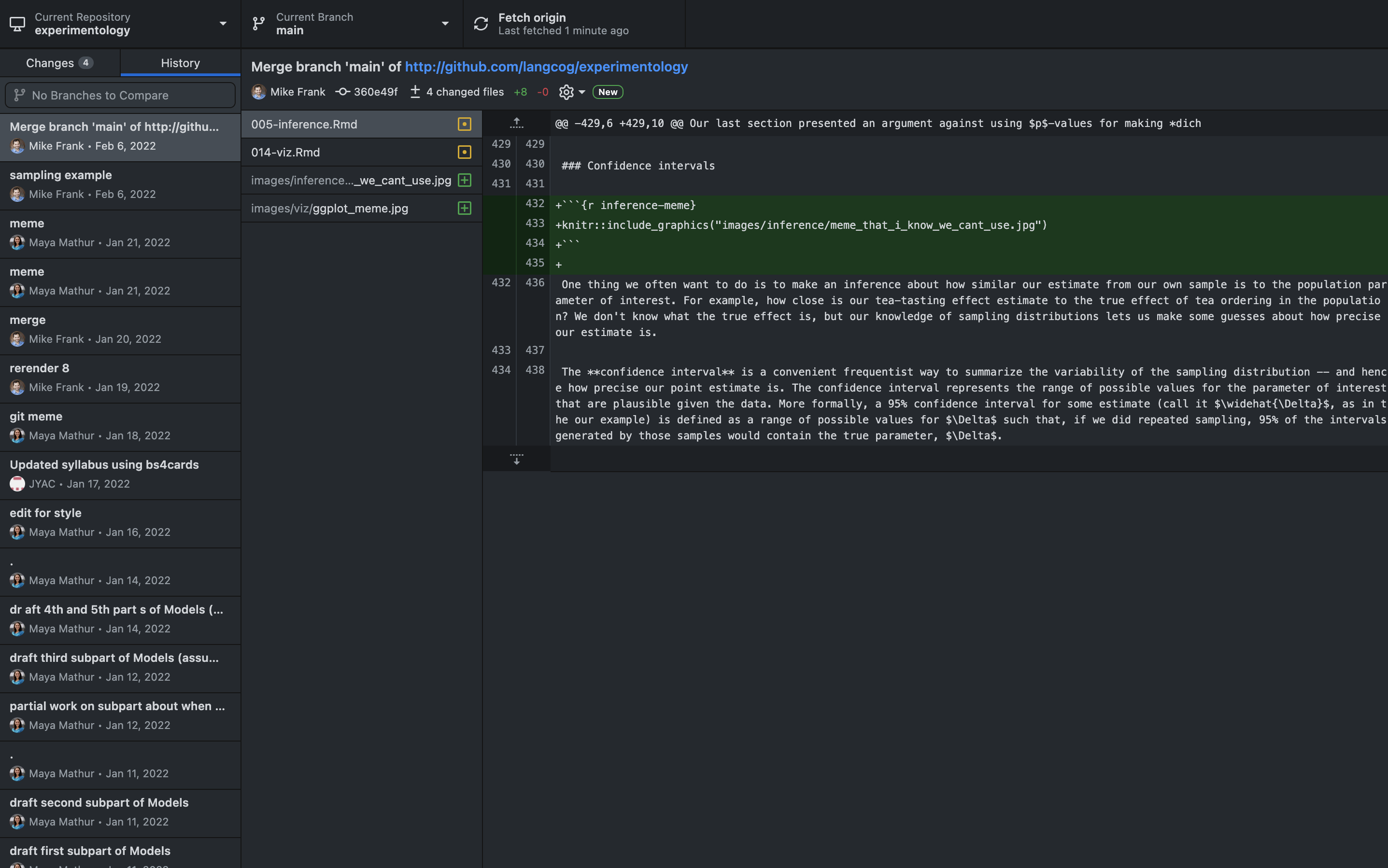 Other options include SourceTree (free), Tower (not free, but powerful and ~$25 with a student discount). It’s also possible to set up a git pane in RStudio.

1.3 Set your name and email address

Also run this once (it ensures that git pushes in a sane manner):

2. Make a repo on GitHub, clone it to your computer

Call it ‘hello’ and make sure the “Add a README file” checkbox is checked255 For future reference (feel free to ignore this!): you can also turn any directory that’s already on your computer into a git repo by going to that directory using cd and then typing git init. Later, when you want to put the repo on GitHub, you go through the steps to make a new repo without initializing with a readme, then from your directory on your computer type the following (replacing the red text):.

Then click the green ‘Code’ button to get the HTTPS URL:

Go back to Terminal (or GitBash).

First use cd and ls to navigate to your desktop. (Mac users can type cd ~/Desktop to get there.)

Then type (replacing the URL with the one you copied above):

At this point, if you are using a new GitHub account, you will most likely be prompted to authenticate to GitHub. There are a few ways to do this, depending on how you are accessing GitHub (all the options are outlined in more detail here, including instructions for GitHub Desktop), but we think the easiest way is to create a personal access token (PAT) to use in place of a password. To do this, follow the directions outlined here.

Once you generate a PAT, try the command again:

If prompted, enter your GitHub username and newly generated PAT in the place of your password256 If you would like a credential helper to help you store the PAT, follow instructions here based on your operation system.. Now you should have a cloned copy of the empty repo on your Desktop.

What are “commits”? A commit is a snapshot of your project at a certain point in time. Each commit has an author, a time, a unique long ID (also called a ‘SHA’ or ‘hash’), and a message describing what change it makes.

A README file contains information about other files in a directory, and it’s customary to include one in your git repo. Your README will be rendered from markdown on the front page of your GitHub repository (see here and here for an example).

When you initialized your repo on GitHub, the site created an empty README file. Let’s write something in it.

Open the README file in a text editor257 There will be lots of files that are simple text files, with .md, .rmd etc. as filetypes. You can open all these with a text editor. Although your computer comes with a default one (e.g. Notepad, TextEdit), we would recommend downloading Sublime Text, which is free and has a lot of powerful tools that will be helpful in the future. and write a sentence or two describing your repo, and save your changes. (Read the basics of markdown and use it appropriately in formatting your README.)

3.2 Add and commit changes to git

In Terminal, navigate to the repo by typing:

You’ll get a message telling you that your README has been modified.

Now we will add this file and commit it258 For future reference (feel free to ignore this!): you can add just part of the file by using git add -p README.md and following the instructions at the bottom of the terminal window. so that git takes a snapshot of the changes we made:

(-m precedes a commit message, which allows you to describe what you changed.)

If you now type:

You’ll get a message telling you that everything is up to date (“nothing to commit, working tree clean”).

3.3 Add another file to the repo + commit it

Use RStudio259 We’ll be using R and RStudio in the future. If you do not yet have those downloaded, you can open up a text editor and do the same thing. to make a new R script containing one line, e.g., print("hello world"). Save this as ‘pset0.R’ inside the hello folder.

Then, back in the terminal, type:

This will tell you that a file called pset0.R exists, but isn’t being tracked by git.260 If you find a file called “.DS_Store” that is being tracked, that is a mac file saving folder preferences. You can add this to a .gitignore file as described in step 7 below so that git will not track it.

Now we will add this file and commit it (so that git starts to track it):

4. Push your changes to GitHub

What we’ve done so far – add and commit – only affects your local computer. To get your changes on GitHub, use push:

If you go to your GitHub account, you can now see the updated files.

5. Make more changes to the repo

Now make some changes to your pset0.R file (delete and/or add another line or two of code) and save it.

to see that pset0.R has been modified since the last commit.

To see the specific changes since the last commit, type:

Push to the repository on GitHub:

TIP: Commits should be focused. Try to commit little bite-sized changes that are all related to each other together and easy to label, and make separate commits for other changes.

Best practice for commit messages is to make sure your commit message is not too long and would fit into the sentence: “When you pull this commit, it will ______.”

6. Rolling back to previous versions

Sometimes you will want to go back to a previous commit. Here’s how to do it:

(You can also view the commit history on GitHub.)

You can use the long ID numbers attached to commits (also called hashes or SHAs) to roll back to them if you need to see a previous version of the repo. This can be very useful if something breaks and you don’t know how that happened. You can roll back to the last commit where your program wasn’t broken and see what files changed since then, and how.

(Git is smart enough to figure out what commit you meant to type if you provide the first 8-10 characters of the hash.)

If you open up the hello folder on your desktop, you’ll notice that it’s now in the state it was after you made your first commit.

IMPORTANT WARNING: After you’ve finished inspecting a checkout, make sure you get back to where you started [the latest commit on the main branch] by typing:

To revert your files to the state they were in in an earlier commit, type (replacing 0766c053 with the first 8-10 characters of the hash you copied):

This will essentially take all of the changes you made since this commit, undo them, and then save this as a new commit. (Your prior commits will still exist.)

For more info on undoing things in git, check: https://github.com/blog/2019-how-to-undo-almost-anything-with-git

git commit -m "revert the commit where I did xyz..."

There are some things you don’t want on git:

You can put these in a special .gitignore file so git won’t suggest you add them and will even remind you not to add them if you try to. You can create this .gitignore file in a text editor like Sublime Text and update as needed.

Acknowledgments: Thank you to Cayce Hook, Erin Bennett and Daniel Watson for creating the first version of this tutorial for Psych 251!